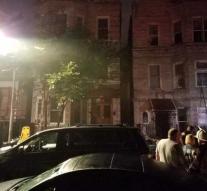 chicago - In a fire in the American city of Chicago, eight people were killed, including six children.

The local fire department reports this to the Reuters news agency. Around 4:00 a night a passerby saw smoke coming out of a building.

A teenager and a young adult were transferred to the hospital in a critical condition. They have suffered severe burns and inhaled a lot of smoke.

The youngest victim is a baby. The names and ages of other victims have not yet been released..

All victims were on the second floor of the building. It is not yet clear where the fire started. The emergency services have started an investigation.