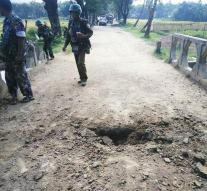 rangoon - In a collision between Myanmar's army and Muslim militants in the state of Rakhine are Saturday eight people were killed. 36 people have been arrested, reports state newspaper The Global New Light of Myanmar.

Two people were killed on the side of the army, which was attacked Saturday by sixty warriors. Muslim militants were armed with guns, knives and spears, the newspaper said.

The Rakhine state, bordering Bangladesh, has been a month the scene of violence. The Muslim minority that lives there, the Rohingya, according to human rights organizations have for decades marginalized and persecuted.