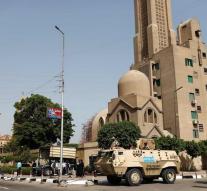 cairo - The Egyptian army killed fourteen armed men near the city of Ismailia on Saturday. According to the Ministry of Interior, the men were involved in the attack of a day earlier. Then 23 Egyptian soldiers were killed by a bomb attack on a control station of the army in North Sinai. At least 26 soldiers were injured.

It was the bloodiest attack on security forces in years. Two vehicles were blown by suicide terrorists at the time they drove past the checkpoint in an area between Rafah and Sheikh Zuweid. Terrorist Movement Islamic State claimed responsibility for the attack.

IS is very powerful in northeastern Sinai. Since the rise of the group hundreds of soldiers and police officers have been killed.