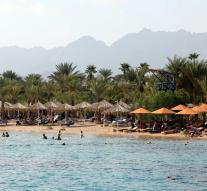 - Revenues from tourism this year in Egypt, 10 percent lower than last year. Causing the disaster with a Russian plane carrying tourists in late October, the Minister of Tourism announced Tuesday.

After the unrest in the country a few years ago, Egypt again expected a growth in tourism. But the sector is again hit hard following the crash in the Sinai of the Russian aircraft that was taken off in the resort of Sharm al- Sheikh. All 224 passengers perished. On board was a bomb, which IS has claimed responsibility.

The Egyptian minister Hisham Zaazou said Egypt it works to close any gaps in security. The country is hoping that foreign travelers coming back to the archaeological sites, desert tours and beaches.