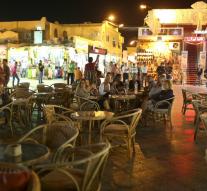 - Egypt loses every month nearly 265 million euro of revenue due to the discontinuation of flights to the country by Russia and the United Kingdom. This has the Tourism Minister Hesham Zaazou, Wednesday in Cairo said.

A Russian plane carrying mostly Russian tourists on board crashed October 31 down to after briefly taken off from the airport of Sharm al- Sheikh. That is a wildly popular Russian resort on the south coast of Egypt's Sinai Peninsula.

It is suspected that the appliance by a bomb blast crashed. There were 224 people killed. Fearing more attacks, many countries have stopped flights to Egypt, except flights to take tourists there fly back home.