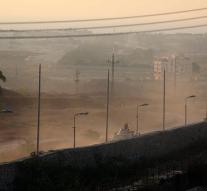 - Egyptian security forces have killed thirty Islamic militants in the north of Sinai in the last four days.

The army declared Friday that it was about 'very dangerous' insurgents, but did not indicate which militant group they belonged to. In addition to thirty deaths, five people were arrested for several operations.

IS is very powerful in northeastern Sinai. Since the rise of the group hundreds of soldiers and police officers have been killed. In July, for example, 23 soldiers were killed by attacks with car bombs in Sinai. It was the bloodiest attack on security forces in years. Two vehicles were blown by suicide terrorists when they drove past the checkpoint in an area between Rafah and Sheikh Zuweid.