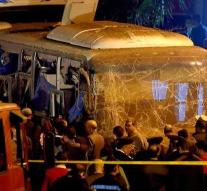 cairo - Egyptian security forces have killed 40 militants during two separate operations after an attack with a roadside bomb Friday on a tourist bus at Cairo. In addition, four people came...

The militants were planning to carry out attacks on churches, government agencies, the armed forces and tourist places, the Interior Ministry said in a Saturday statement. The operations took place in the Sinai desert and in Giza, a suburb of Cairo.

Three Vietnamese and an Egyptian guide were killed in the bomb attack on Friday.