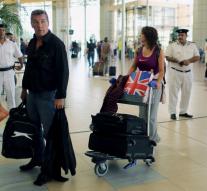 london - The Egyptian authorities hold the repatriation of British out of Sharm al-Sheikh at. So says the British airline easyJet Friday. A number of flights that this company would carry, was deleted by Egypt.

Britain put an air bridge to retrieve the approximately 20 000 tourists stranded in the Egyptian resort. According to easyJet eight flights to Sharm al- Sheikh deleted that tourists would be picked up. Two devices that are already in the seaside, can go well according to the company.