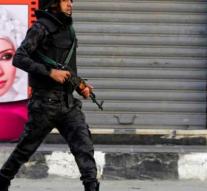 beirut - The Egyptian police and security services have since the end of October at least forty human rights activists, lawyers and political activists detained. This is stated by the human rights organization Human Rights Watch (HRW) on the basis of interviews with persons representing the families of the detainees. The organization speaks of a 'massive arrest campaign.'

According to HRW, most of the detainees are people who provide legal and humanitarian assistance to political prisoners and their families. They would have been arrested without arrest warrants and the authorities do not want to tell family members and lawyers where they are being held.