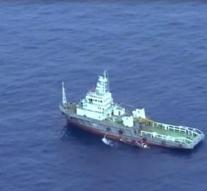 - Egypt can have the information of the two black boxes of the disaster of flight MS804 EyptAir within days which crashed on May 19 in the Mediterranean Sea. French engineers have managed to repair the damaged flight data recorder (FDR).

The FDR was sent Tuesday to Cairo. The read and analyze the data takes several days. Restoration work on the cockpit voice recorder (CVR) are taken up Tuesday in Paris, as the Egyptian Review Committee reported. The damaged memory chips of both recorders are some time ago sent by Egypt to France, where specialists took repairs on their behalf.

The Airbus A320 crashed during a flight from Paris to Cairo with 66 people on board in the Mediterranean Sea. The pilots were rattled not report problems for the aircraft from the radar screens.