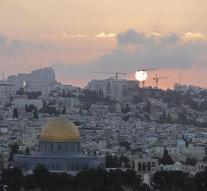 jerusalem - Egypt has freed an Israeli Arab who was trapped for fifteen years for espionage. In return, Israel released two Egyptians. Israeli and Egyptian officials made ​​the prisoner swap announced Thursday.

The Israeli has since returned to his country, told the office of Prime Minister Benjamin Netanyahu. He was arrested in 2000 while visiting family in the Sinai after he crossed illegally the border with Egypt. Then he was convicted of espionage.Which convicted the two Egyptians, is not known.
NEW