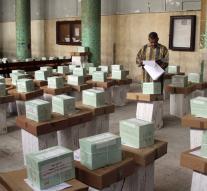 - Egypt holds Sunday and Monday the second round of parliamentary elections. Residents of thirteen of the 27 governorates cast their vote. It is from 08:00 am (Dutch time), more voted in the capital Cairo.

There are 596 parliamentary seats at stake. Egyptians vote on some 3,000 candidates. Half of the voters if on 18 and 19 October in all the polls. Only 25 percent of them, however, showed up. The party that is loyal to the current president Abdel Fattah El-Sisi won in the first round. The official results will in early December.

Egypt 's been three years without a parliament. A judge dissolved the parliament in June 2012, because the elections would be fair not expired. That was a year after former President Hosni Mubarak was deposed by the army.

The Muslim Brotherhood won in the last parliamentary elections the most seats. The party can now not participate because she is seen as a terrorist group.