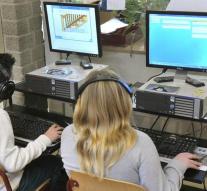 amsterdam - Students adore the under-ict facilities at their schools. This is evidenced by research conducted by over a thousand students in mbo, hbo and wo from Markteffect, commissioned by IT company New Day at Work.

A quarter of respondents give the IT at their school a grade six or lower. One of the main problems is that many of the services provided do not work well on a smartphone. A total of 23% of the respondents gave this as the biggest problem. Also, many students (21%) get sick of the many referrals they encounter on internal networks.

Finally, a third of the students say they once missed a lesson because the information they received digitally did not knock and one in ten knew to have poor insight into the study progress.

Gijs van Hees, Opportunity Maker Education at New Day at Work, on the results: 'Students are increasingly educated in the form of digital education, increasing the expectations of ICT increasingly. The student generation from now grew up with the idea that apps are accessible anywhere and anywhere. Not so strange that they also expect such tools at school. '

He continues: 'On the other hand, education institutions themselves make high demands on archiving, security and the manageability of the infrastructure. The combination of the needs of both parties poses a challenge in ICT within education. This has consequences for student progress. '