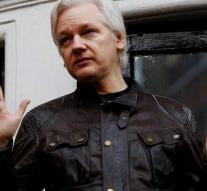 london - Ecuador has devised new house rules for Julian Assange, who has been living in the embassy of the country in London for six years. If the WikiLeaks founder does not comply with these guidelines, this may result in his diplomatic asylum being withdrawn.

This is shown by an internal memo that has been viewed by the British newspaper The Guardian.

Assange must ensure, among other things, that his toilet stays clean and cares for his cat better, otherwise he has to hand in the pet. The Australian and his guests are also not allowed to connect equipment on their own. If they try to do so, according to the memo this is considered a security breach and reported to the British authorities.