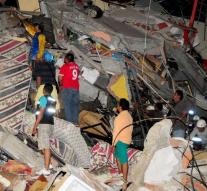 - The death toll from the earthquake that struck Ecuador Saturday will advance rapidly. The counter is now at 77 dead and more than five hundred wounded, said Vice President Jorge Glass. The government expects the death toll during Sunday continues to rise.

The quake with a magnitude of 7.8 was the worst in decades in the country and was followed by 55 aftershocks. The epicenter was off the coast, about twenty kilometers deep, but the quake was felt hundreds of kilometers away in the capital, Quito.

President Rafael Correa declared a state of emergency and has been previously returned from a visit to Vatican City.,, Everything can be rebuilt, but lost lives do not come back. That hurts the most, '' Correa said from Rome.