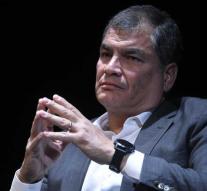 quito - The Ecuadorian prosecutor is going to sue former president Rafael Correa for the failed kidnapping of opposition politician Fernando Balda in 2012. Judge Daniella Camacho announced on Wednesday that there is enough evidence that Correa was the supposed brain behind the kidnapping attempt to start a trial against him.

Balda was a member of the Constituent Assembly and fled to Colombia when he was sentenced to two years in prison in Ecuador for insulting the government of Correa. In the Colombian capital Bogota, an attempt to kidnap him failed, when the kidnappers and their victim were arrested by a police patrol. The perpetrators, who were convicted in Colombia, declared to act on behalf of the Ecuadorian secret service. They had to bring Balda back to Ecuador.