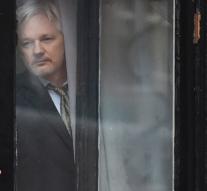 - Julian Assange will remain for the time being still living in the Embassy of Ecuador in London. The chief public prosecutor in Ecuador on Tuesday said he foresees no way for the Australian founder of WikiLeaks.

The officer questioned Assange (45) on November 14 at the Embassy in the presence of a Swedish officer and a policeman. Sweden wants to extradite Assange in connection with allegations of rape in Stockholm in 2010. In order to avoid extradition, Assange fled in 2012 at the Embassy of Ecuador.

The Australian fears that Sweden sends him to the United States, who want to prosecute him for leaking hundreds of secret documents by WikiLeaks. He has, moreover, always denied the allegations of rape in Sweden. Ecuador demands, The Guardian reported Tuesday that Sweden agrees that it will not extradite Assange to the US. The Swedes were allowed to purchase a DNA sample from the Australian during the hearing on the 14th associated with their research.