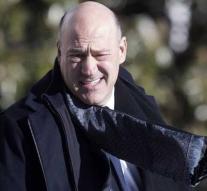 washington - The top advisor of US President Donald Trump in the economic field, Gary Cohn, has resigned. The White House reports this Tuesday.

Cohn, a top banker on Wall Street, was the great architect behind Trumps tax reforms that were implemented last year.

'It was a great honor to serve my country and to ensure that economic policy is based on growth for the benefit of the American population, such as historical tax reforms. I am grateful to the President for giving him this opportunity and wish him and the government every success in the future, 'said Cohn in a statement issued by the White House.

The exact reason for Cohn's departure is not given. It would have to do with the tariffs that Trump wants to levy on foreign steel and aluminum. Cohn, like many other Republicans, strongly opposes this measure.