Home / World / Ebola is back in the Congo 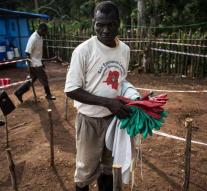 kinshasa - Two cases of highly contagious Ebola have been identified in the Democratic Republic of Congo. Ten people are thought to have contracted the disease, but that is not yet certain.

The Ebola cases were discovered in the northwestern city of Bikoro. Congo declared in July last year that the then prevailing Ebola epidemic was over. It had lasted two months.

It was the eighth outbreak in the Congo since the discovery of the virus in that country in 1976. In 2014, 42 people were killed by the virus. In the same epidemic, the disease killed 11,300 people in Guinea, Sierra Leone and Liberia.