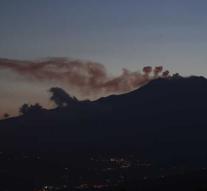 palermo - The east of Sicily was hit by a small earthquake in the night from Friday to Saturday. Because of the quake with a force of 4.8, residents of the volcano were startled by Etna. Buildings suffered limited damage and several people were slightly injured.

The quake was at a depth of about nine kilometers. The epicenter was located near the town of Santa Maria di Licodia, northeast of provincial capital Catania. According to the fire brigade, the quake caused, among other things, plasterwork to crumble in some buildings, but there is no significant damage.

Out of fear of aftershocks, many people did not dare to enter their homes after the quake and spent the rest of the night in the street.