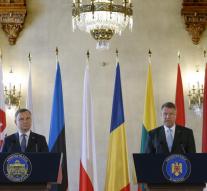 bucharest - The leaders of nine central and eastern European countries and the Baltic states are "seriously concerned" about the " aggressiveness " of Russia and support a lasting NATO military presence in the region. This is what the countries Wednesday in a joint statement after a summit in Bucharest.

" We are firm about the need for Russia to return to respect for international law, its international obligations, responsibilities and obligations as a precondition for NATO-Russia relationship based on trust ", said the leaders in their statement.

The leaders of the so-called CEE countries will strive for " a robust, credible and sustainable " NATO's military presence in their region. They also advocate a deeper cooperation between the military alliance and the EU. The US-led alliance 's next summit on 8 and July 9, 2016 in Warsaw.