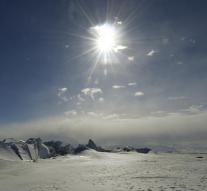 utrecht - The ice sheets of East Antarctica melting much faster than expected. This is because a continuous strong wind warm, dry air raises and blows away the snow. As a result, the surface becomes darker, resulting in a greater absorption of heat. That concludes a team of climate researchers led by Jan Lenaerts (Utrecht University) and Stef Lhermitte TU Delft.

They rely on a combination of climate models, satellite observations and measurements on the spot. Their research the scientists write in the latest issue of Nature Climate Change on Monday.

In the current estimates of sea level rise are major uncertainties. Little is known about future developments of the ice shelves. ' There is little to see climate change on the eastern side of Antarctica, because the area is so much isolated from the rest of the world. Now that the ice shelves appear in East Antarctica to the surprise of the researchers melt regionally much stronger than expected, '' said Lenaerts.