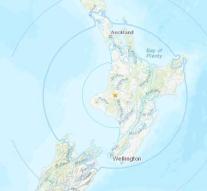 wellington - An earthquake with a strength of 6.7 on Tuesday morning hit the North Island of New Zealand. According to reports in the media, the earthquake lasted about 30 seconds.

The center of the quake was 165 kilometers deep at Taumarunui. There are no reports of possible victims or damage.

The parliament in Wellington interrupted the session because, like in other parts of the city, the quake was felt there. It is one of the heaviest quakes since November 2016. Then the earthquake had a force of 7. 8 and two people were killed.