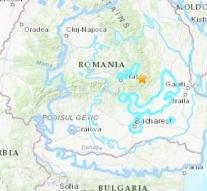 bucharest - Romania was hit by an earthquake in the night from Saturday to Sunday. The shock with a force of 5.8 was felt in the capital Bucharest. It is not known whether the quake caused damage and whether people have been injured.

The epicenter of the quake was according to the Romanian newspaper Adevărul in the Vrancea region, east of the city of Brasov (Kroonstad). The quake took place at a depth of about 150 kilometers.