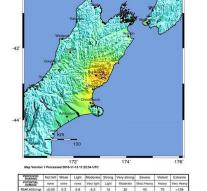 - The South Island of New Zealand's Sunday spooked by an earthquake that is felt in many parts of the country. According to local media, there was a quake with a magnitude of 6.6. The American Geological Institute USGS reported a magnitude of 7.4. The quake was deep and almost 100 kilometers from the city of Christchurch.

An earthquake in the region caused in Christchurch in February 2011 185 dead and hundreds wounded. In February this year Christchurch was shaking again, but then there was only material damage.