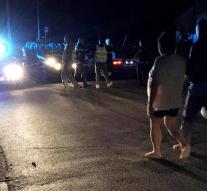 rome - In the night from Tuesday to Wednesday's Italy hit by an earthquake of magnitude 6.2 that may have caused a lot of damage. In addition, according to the Italian television channel RAI deaths.

The epicenter of the quake was near the city of Perugia in central Italy. The quake which took place around 03. 30 hours, could be felt up to it in Rome.


In town Amatrice, the quake caused a lot of damage. According to the mayor, buildings collapsed and people are trapped under the rubble. As yet there are no reports of deaths.