Home / World / Eagles of Death Metal : back to Bataclan 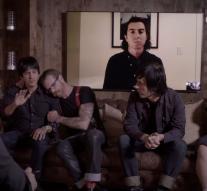 - The band Eagles of Death Metal will return to concert Bataclan in Paris, the place where a massacre was perpetrated during their concert. "I want the first band that plays at Le Bataclan when it opens again," said singer and guitarist Jesse Hughes in an interview with Vice.

Last week Vice placed in a small part of the interview, Wednesday the full interview with the band was put online. The aback band members tell what they have experienced. In the Bataclan shots terrorists during the attacks Paris dozens of people dead. " The shots kept about ten minutes to fifteen minutes. Sometimes I paused and felt relief, but then rose again. Then there was a sudden explosion. We did not know what it was ", says bassist Matt McJunkins. Crewmember Nick Alexander came.

The band made ​​the tour where they were broken off doing, but who wants to finish. " Not only for ourselves, our fans and for Nick, but because this is our life ", says co-founder Josh Homme.