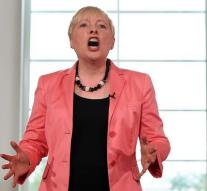 london - The 55-year-old British sociaaldemocrate Angela Eagle gives her attempts to become leader of the opposition Labour party on. The Daily Telegraph reported Tuesday that Eagle gives up, possibly because they are much less popular in opinion polls than the current and controversial Labour leader Jeremy Corbyn. Of respondents in a poll by research firm YouGov rallied 54 percent behind the radical left Corbyn and 21 percent behind Eagle.

Eagle continues to oppose the leadership of Corbyn. She said she supports Owen Smith as new Labour leader. Which stands at 15 percent in the poll cited by the Telegraph.

As a result of the outcome of the referendum on June 23 on the termination of membership of the European Union, the party further torn. Corbyn is among others accused of having done little to prevent a majority for leaving the EU (brexit) would choose. Labour is a party to the EU membership. In parts of the country where many traditional Labour voters live, especially in the north of England, however, was widely used for the brexit voted.