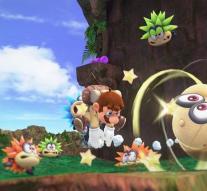 - Last week, the Electronic Entertainment Expo, the E3, took place in Los Angeles. It was a good game with lots of announcements and nice games. These are our ten highlights; in random order.

The famous plumber conquered all the hearts of Los Angeles. With the open-world gameplay that allows players to explore freely and a series of new moves on skills, Nintendo has completely reinvented the circumscribed platform hero.

The sympathetic superhero will not go to PlayStation 4 until 2018, but it's already making a deep impression. New York as a pendulum decor gives Spidey free play for overwhelming acrobatics. Enemies are eliminated in different, non-lethal ways, giving your web-creativity more endless possibilities. The gameplay is also filmic with a capital letter F.

After a year off, Assassin's Creed is back with Origins and this time we learn about the very first order of the Assassins in ancient Egypt. It is striking that control is much more intuitive, which makes climbing and combat flexible. This time you use a bird that is the environment for your scout and you can knock as a side activity in a real gladiator-like arena. Origins has the largest environment ever in an Assassin's Creed title.

Call of Duty has never gone back, but it's a relief to double-jump and hypnotic science fiction after years of re-action with your nose in the sand and mud during World War II. The game plays delicious, looks very nice and solid game patterns are going to be fun on the shovel. This way you can no longer create your own class, but choose a division. The new War mode also lets you play in maps where you have to accomplish certain goals and need to work together, instead of bouncing Rambo just for killing yourself.

Microsoft's powerful new console is a beast of a machine that allows games to run in native 4K at some 60 frames per second with HDR support. That delivers beautiful images and, potentially, fast-paced performance where developers have a great deal of benefit while optimizing their games. When Anthem, the new game of BioWare (the creator of Mass Effect), is a forerunner of all the freaks that come, beautiful times come true.

The racing game Forza Motorsport 7 is a title that maximizes the horse power of the Xbox One X. In addition, the game is filled with game modes. Of course, this racing show is also just playable on Xbox One and the Xbox One S model, but it shows how Microsoft's powerful gaming computer is capable. Every time you think that racing games can not be more beautiful, then a title like Forza Motorsport 7 is over.

Spartan Kratos has exchanged Greek Mythology for the Norwegian myths and fables in God of War. But more has changed. Kratos has a son fighting on his side with arrow and bow. Kratos clearly plays his role as a father, giving the gameplay more dynamism and balance. There is still a lot of chopped and chopped, but there is more room for reflection and dialogue.

The sequel to Star Wars: Battlefront from 2015 is bigger and more comprehensive. Two major criticisms have been addressed: the multiplayer battles are feeling bigger and part two now knows a single player campaign in which you witness the events after Episode VI through the eyes of a female soldier to The Emperor. It's just getting used to shooting at Rebels, but the gameplay is nothing short of spectacular.

Take a game like The Witcher III, defeat that of its magic, move yourself in the 15th century and you have a little idea what to expect from this historically very accurate medieval adventure RPG. It takes place in the medieval kingdom of Bohemia, a former area of ​​the Holy Roman Empire. The game features authentic clothing, weapons and fights, as well as imagery battles. The game is singleplayer only and is non-linear. How you finish your quests is entirely up to you. We are a fan!

The English studio Rare has a hugging cartoon cartoon online open world pirate team in which you can do all that Johnny Depp sparks in the Pirates of the Caribbean movies, only with full freedom. Enter ships, dive into a wreck on the bottom of the ocean, sword fighting with competing pirates or lavish skeletons, rum drinking, playing harmonics, sailing on the seven seas in heavy storm and rain, or under a shining sun looking for a treasure An exotic island. Awrrrr!