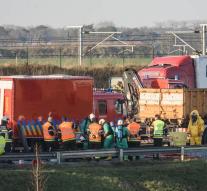 loenhout - E19 between Antwerp and Breda remains possible until Friday closed following a collision between three trucks. From one of the vehicles is leaking a 'hazardous chemical.' That must be cleared first. Only after the salvage work can begin, reported the Flemish broadcaster VRT.

For some it's just dust, is still unknown. But the fire department advises motorists who drive on the other side of the E19 from Breda to Antwerp to turn off their ventilation precaution.

Who wants from Belgium to the Netherlands, detours via Bergen op Zoom or Eindhoven. According to Belgian media, too many people use the roads, traffic jams may result.