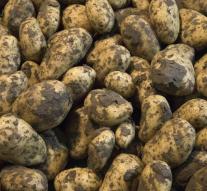 - A new type of electronic sending of potatoes in the ground information about the conditions in which to grow potatoes. After the blue ball farmers have stopped in the ground, measuring sensors, inter alia, the temperature in the arable land.

The tool was presented this week by the agricultural technology company Solentum. The beeper measures temperature, humidity and CO2 levels. see through a wireless connection to smartphones potato farmers how it underground for state. The Solantenna, as the device is officially known, also shows after lifting the circumstances in which are stored the potatoes.

The electronic potato is not in itself a new tool for farmers. Older versions of the device already explained how many shocks to endure potatoes get to the grub, but had no other sensors.