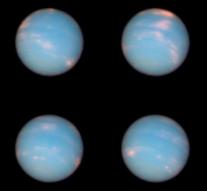 - An international team of astronomers has discovered a new dwarf planet in the outer reaches of our solar system. The object of roughly 700 kilometers, until a name is specified designated RR245, is part of the belt 'lumps of ice' far beyond Neptune. The discovery was made with the telescope on Mauna Kea volcano in Hawaii

,, The ice worlds beyond Neptune reflect how giant planets are formed and then moved away from the sun. They help us to reconstruct the history of our solar system. But all these icy objects are very small and faint. Therefore, it is so exciting to find one that is big and bright enough to study in detail, '' said Canadian astronomer Michele Bannister.

RR245 is up to 120 times farther from the sun than Earth and describes a highly elliptical orbit, which is precisely calculated the coming years. Then it is also more evident over the surface and the composition. Of the previously known dwarf planets Pluto and Eris are the greatest.