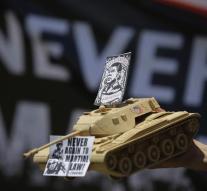 manila - Philippine President Rodrigo Duterte is willing to negotiate with the extremist Maute movement, which is engaged in heavy fighting with the army on Mindanao Island. 'My message to the terrorists is that we can still resolve this through consultation,' said Duterte.

The president made that ruling while he spoke to the military on Mindanao. The army has been trying to expel the Maute's extremists of Islamic state for days to come from the city of Marawi. The fighting has already killed dozens of people. Thousands of civilians were killed.

The sudden willingness of the authorities into a dialogue is striking. Duterte called his armed forces earlier this week to leave no armed insurgents alive. 'If I think you have to die, you will die. If you fight against us, you will die, 'the president announced Wednesday.