Home / World / Dutter: Marawi is released from IS 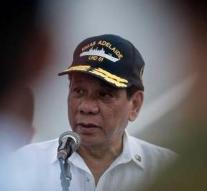 manila - Philippine President Rodrigo Duterte has declared that the city of Marawi is free from insurgents affiliated with IS. The president declared Marawi liberated while visiting Philippine troops in the city, reporting local Filipino media. The Philippine army killed two rebel leaders on Monday.

Marawi is the only city in the Catholic country where Muslims are in the majority. Parts of the city were held by a local rebel group who has declared loyal to IS since 23 May. By fighting between the rebels and the Philippine army hundreds of thousands of Filipino people have been displaced. According to the authorities, 813 rebels, 162 soldiers and 47 civilians have been killed in recent months.

According to a military spokesman, the battle is still ongoing. There would be about thirty rebels in the city, holding 20 hostages.