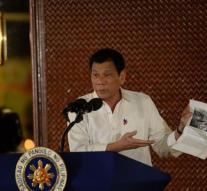 - "The Philippine president Rodrigo Duterte wants US special forces are withdrawn from the south of his country. Their presence makes offensives against local Islamist factions difficult, because they sought hostages, Duterte said Monday."

",, I do not want to quarrel with America, but they have to go, '' said Duterte on the special units, which give Filipino military training. Groups like Abu Sayyaf,, the Americans will really kill, or try to abduct to collect ransom. '"