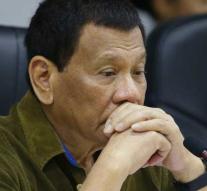 manila - The Filipino president Rodrigo Duterte is very concerned about his health. He takes into account that he has cancer or a serious illness and does not intend to stay on as head of state if that turns out to be the case.

Duterte had not shown himself in public for more than a week. Because of that absence, the president fed speculation that he has health problems. The president has now admitted publicly that he is not feeling well. He has, among other things, Buerger's disease. As a result, the arteries become blocked, which can lead to amputation of limbs.

Duterte acknowledged that he has undergone several medical examinations in recent weeks. He awaits, among other things, the outcome of an investigation of a tumor. 73-year-old Duterte said that if it turns out that he is at an advanced stage, he will not be treated. 'Then I will not continue the torment in this office. '

Duterte is very controversial as president. After he came to power in 2016, he started a true witch hunt for everything related to drug trafficking and drug use.