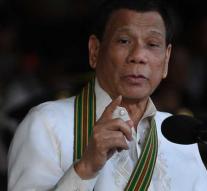 manila - Filipino president Rodrigo Duterte has announced that he wants to receive Rohingya who have fled Myanmar. 'I am prepared to accept refugees. Rohingya. I will help, but we should share them with Europe, 'he said during a speech.

Duterte also reached the international community. He fails to solve problems in Myanmar in his eyes. Approximately 700,000 people have been fleeing from that country since August last year. The Filipino leader concluded that there is 'genocide. '

Duterte's remarks aroused the resentment of the Myanmar government, which denies that there is genocide. 'He does not know anything about Myanmar,' said a government spokesperson. 'That person speaks as usual without any restraint. That's why he said that. '

Duterte himself is also undisputed. He received a lot of international criticism because of his bloody battle against drug-related crime. The president decided this year to leave the International Criminal Court (ICC), which had started a preliminary investigation into extrajudicial killings.