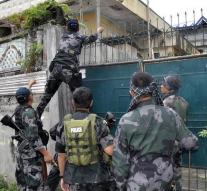 manila - Philippine President Rodrigo Duterte did not know that the US would help with special units in the fight against extremists on the Philippine island of Mindanao. He only came back when the units arrived.

Duterte said that Sunday. According to the president, America has also not been asked for aid from the Philippines and has not approached the US itself. 'I did not know until they were there.' Relations between the Philippine president and Washington have been very bad for months now.

The American soldiers help in the fights around the city of Marawi, where May 23, jihadists with ties with the terrorist group have entered the Islamic State (IS). A spokesman for the US Embassy in the Philippine Capital confirmed on Saturday that US troops were deployed.

Manilla still announced on Saturday that the Philippine troops are being given military support to Marawi's 'Technical Assistance'. But those Americans would not be in the fights themselves.