Home / World / Duterte does not criticize itself 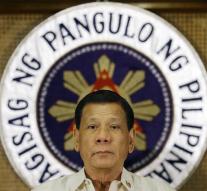 manila - President Rodrigo Duterte of the Philippines is aware of the international criticism of his bloody fight against drug trafficking. But he does not like that pressure, he said Monday. He continues the war against traders and users without delay.

Duterte said during the annual presidential speech, the so-called State of the Nation. He believes that critics, at home and abroad, have to use their influence once again to stop the inhabitants of the Philippines from unauthorized drug use.

'The fight against drugs will not stop and remain inexorable,' said the president. Duterte called the world of drug traffickers and users a 'jungle with animals hunting innocents. 'Rodrigo Duterte joined a year ago. Estimates of the number of victims of his 'war on drugs' run in the thousands.