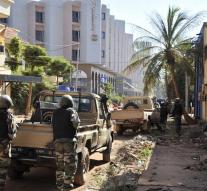 bamako - From the Radisson Blu hotel in Bamako this morning heard two explosions and " quite a bit of shooting." So says Jan Paul Hogervorst, a Dutchman who lives 250 meters away. Throughout the morning, he heard shots and flying planes and helicopters.

Former tour guide Hogervorst is driven at the end of the morning towards the hotel, but a block before he was stopped by soldiers. "When we woke up this morning we heard more sirens than usual. I then at half past eight even brought my son to school, but that was ten minutes later by his teacher again brought home. Everyone in the neighborhood is now inside with the door locked. "

According Hogervorst there are also soldiers of the UN mission Minusma involved in the encirclement of the hotel, but it is unlikely that Dutch are involved. Netherlands delivers 450 soldiers, four Apache helicopters and three Chinook transport helicopters to the mission, but they are stationed in the east of the country.

Dutch often there sitting at the Radisson Blu, says Hogervorst. "It is a western-style hotel. It is rumored that there is currently a delegation from Morocco is and that they would be targeted because Morocco supports the Government of Mali with lots of money and resources. Normally this is a nice area to live. The US Embassy is also here, as are the headquarters of phone company Orange Mali. "

Hogervorst thinks the movement Ansar Dine, which two years ago very hot tried to conquer Mali and implement the Shariah in, behind the attack. The Dutchman Willem Snapper, who also lives in Mali, suspects that too. "This fits the pattern of IS. These movements are all connected and they just monkeys after each other. "

Snapper lives in Sévaré 650 kilometers from the capital.. This hotel was taken hostage in August, by another group of Muslim extremists. In addition, twelve people were killed. In Bamako, would have fallen at least three deaths so far. Although there are many French people are in the hotel, including a crew of Air France, Snapper did not think they were targeted. "Usually focus etxremisten here at soldiers. "