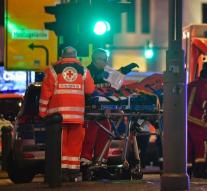 berlin - 'It's terrible. Friday I'm still on the Christmas market. It's near here. 'With these words does a Dutchman who has lived in Berlin for many years and as co-owner of a restaurant. He does not mention his name.

'It's one of the many Christmas markets in the capital, but this is a special place. It's at the Memorial Church, a church that is intended as a memorial to World War II, 'he adds.

He is convinced that the attack, if it was an attack, will affect not only the Berliners, but also tourists. After the attacks in Paris and Brussels remained guests towns away. 'Of course, it always has an impact. Many people will try to avoid the Christmas markets in any case. '

Even the Netherlands remains sober. He will not be influenced, 'It can happen anywhere and it happens everywhere. I will not sit at home. '