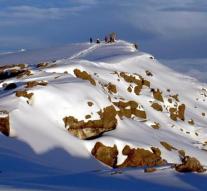 ulvenhout - The 53-year-old Jack Dellepoort from the Brabant Ulvenhout died on Friday morning while climbing the Kilimanjaro in Tanzania. After the highest mountain of Africa (5895 meters) was climbed, it was at the top of the horrible mistake.

Friend Hans de Kort from Breda, who accompanied Jack on the tour, explains to BN DeStem what happened. 'We had reached the summit, Friday morning quarter past six, after which he suddenly became unwell. There was immediate help from guides and people with oxygen and measuring equipment to measure blood levels and heart rate. '

The Short had to start the descent while the rescue was still in progress., With two African guides. I was just taken along, they were afraid that I would also overcome stress. Then I did not know of his death yet. '

After a long descent of ten o'clock, De Kort entered the base camp. There he received some insistence that his friend had passed away. 'I completely broke my hooves. In retrospect, I understand they find it difficult to tell such a message, they are ashamed of it. '

Sunday evening, Hans de Kort Sunday morning returned from Dar es Salaam. He was very excited by the death of his 'best friend'. 'We traveled a lot a lot and climbed a lot, in Scotland, base camp Mount Everest. In Europe, in Asia, always with lots of fun and success. Never extreme with ropes and so, but as great lovers. ''

Jack Dellepoort had his own business and was to find the Bredase cafe De Bommel every sunday. 'Many people know Jack, from the friends clubs. Our 35-year-old friendship will live in mind. '

The body of Dellepoort is brought to the Netherlands on Friday. The Brabander leaves his wife and three children after.