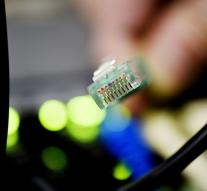 amsterdam - Anonymous Internet can still anonymous. Before that, the Dutch student Jelle van den Hooff (24) developed a completely new network. This should make it much harder for hackers and intelligence agencies to spy on people. Thanks to the vuvuzela.

Millions of people who want the Internet anonymously, such as whistleblowers and opposition members in dictatorships, is currently using the 'TOR network. That leads them through many intermediate steps shielded to their destination, such as a forbidden website. The first computer on the network knows the user, the computer knows the final destination, but through all the intermediate steps one knows both. Users disappear in the crowd.

At least that's the idea. Because intelligence services and hackers are getting better. A strong opponent can follow the whole crowd and see precisely that I talk to the first intermediate step. Who talks to the second waypoint, and so on. In addition, the opponent can see what is going back and forth. When working with a stack of newspapers a crowd going, and someone else then leave the crowd with a stack of newspapers, they know that it has to come from me, without having ever seen us talk , said Van den Hooff against the ANP.

The solution: feints. The network of Van den Hooff constantly sends each user information to anyone. Part of it is real, some is fake. All the packets are the same size. This brings so much traffic on the network, an attacker the trees for the forest no longer see. He is overwhelmed with noise and chatter. Van den Hooff brought and his colleagues on the name: Vuvuzela. Die South African horn was heard at the World Cup in 2010 everywhere and made some viewers crazy.

The prototype Vuvuzela off, but it is not yet ready for introduction, Van den Hooff stressed. vuvuzela is dependent on a small number of trusted servers, to be managed by very reliable people with lots of money. They are not so easy to find.

As a student of the Vossiusgymnasium in Amsterdam Van den Hooff in 2009 won a gold medal at the International Olympiad in Informatics, 'Programming World Cup 'for the students. He then spent a year studying mathematics at the University of Amsterdam. In 2010 he moved to the prestigious university Massachusetts Institute of Technology, where the internet in the 60s was born. For that institution he developed Vuvuzela. The design was recently presented at a conference in California.