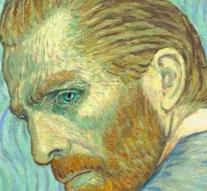 The nominated film that tells about the life and the mysterious death of Vincent van Gogh has been supported for years by the Van Gogh Museum. Museum director Axel Rüger saw in the room how Coco got off the Oscar statue.

Pixarfilm Coco was a big hit worldwide. The film tells about a Mexican boy who travels to the underworld to discover a big family secret. The animated film has won many dozens of prizes.

It is the fourteenth time that studio Pixar won an Oscar. Previously, Monsters Inc, Finding Nemo, The Incredibles and Ratatouille have already won the prize for best long animated film. It was striking that John Lasseter, the big boss of Pixar, was not mentioned in the acceptance speech. Lasseter is on leave for several months on account of allegations of undesirable behavior.

The Van Gogh Museum made a lot of advertising for Loving Vincent in the fight for an Oscar. With the campaign #Vincentdeservesthis, a billboard on the Sunset Boulevard in Los Angeles, advertisements in American film magazines and an extensive social media campaign, the museum showed that Loving Vincent earned an Oscar.

' Van Gogh painted because he was supposed to, he believed in himself and could not follow his dream, despite the fact that he did not get recognition for this, 'says Rüger who would also take the stage if the animation had won. ' Also Loving Vincent is a project 'against all odds', which has come about thanks to passion and perseverance. 'The film is the first completely painted feature film in the world to analyze the life and mysterious death of Vincent van Gogh.