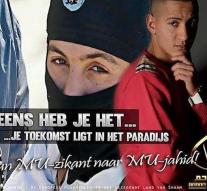 arnhem - Dutch Syrian gangster Marouane B. has made a Dutch rap number and sent to the crime site. He told the crime news site that the number was recorded in Syria and that he is in Raqqa. He would like to come back to the Netherlands; The title of his song is 'I'll be back'.

B. says, 'I'll be back sometime / Mom will not make you busy / I'm in flight'. He says he has included the rap number to show the Netherlands how he feels in Syria. He also apologizes for the poor quality of the recording. His advocate Barbara Klunder confirms that her client's message is from.

The 22-year-old Arnhem is suspected by the Public Prosecutor of participating in a terrorist organization and the preparation of terrorist offenses. B. already sent an open letter last week saying he wants to return and hopes for a fair trial.