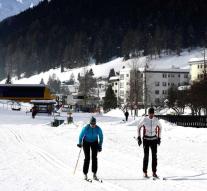 davos - Two Dutch winter sportsmen who got stuck in a thick layer of snow on Thursday evening in Davos, Switzerland, were saved thanks to a remarkable intervention from the Netherlands.

The men had gone off-piste skiing and at some point they were stuck in the snow to their waist. Because they did not know the Swiss emergency number, one of the men called his girlfriend in Utrecht. She, in turn, was able to report to the police officer in Utrecht where the unfortunate skiers were sitting, because she had been given their Gps coordinates via the smartphone.