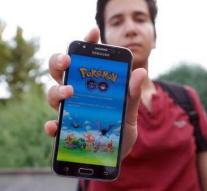 amstelveen - The first Dutch edition of the Pokémon GO Safari Zone is postponed to autumn. Developer Niantic announced on Saturday that the event in the city heart of Amstelveen will not continue on 12 August. Other events in Copenhagen, Prague and Stockholm are also postponed.

Last week, Chicago failed to celebrate Pokémon Go's first birthday due to technical problems with servers and overloaded networks. Thousands of fans at Grant Park in Chicago wanted to hunt for the characters at the same time, but they could not log in to network problems.

Niantic also wanted to organize events in Europe under the name Pokémon GO Safari Zone, but the developer will know Saturday 'not to be able to guarantee the best game experience'. That's why the festivals in Copenhagen and Prague will not go on August 5th and the events in Stockholm and Amstelveen scheduled to be scheduled on 12 August will be canceled. Niantic expresses its apologies and promises that some rare Pokémon will appear in certain European cities soon.

The Pokémon safari in Yokohoma in Japan on 14 August continues. The decision also has no effect on the events in France, Spain and Germany, which will be on the agenda on 16 September.