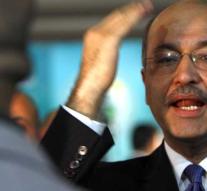 baghdad - A Dutch Kurd has surprisingly seized next to the presidency of Iraq. After a political drama in parliament, Fouad Hussein had to face Barham Salih, who is waiting a tough job to bring the divided and devastated country back on top.

With Salih's choice, a respected technocrat will have to balance the various ethnic and religious groups in Iraq over the next four years. The presidency has a largely ceremonial function, but as a Kurd, Salih can play an important mediating role. He will also have to weigh the interests of America and Iran. Both countries are trying to leave their mark on Iraq.

For Fouad Hussein, who fled to the Netherlands in 1975 and lived there for decades, it means a bitter defeat. Just like for his Dutch wife Carolien, who is not becoming a 'first lady' now.

The election of the 58-year-old Salih once again exposed the intense divisions of the Kurds. It is a tradition that a Kurd holds the presidency (and a Shiite the premiership and a Sunni presidency of parliament), but usually the Kurds only put forward a candidate.

This time they came with two rival parties, who have been involved in a bitter conflict for decades. Tensions were already on the rise in the run-up to parliamentary elections in the Kurdish region of Iraq last week. According to the polls, the KDP, of which Fouad Hussein is a part, won. Salih is from the PUK, which is seen by critics as pro-Iran, where the KDP is more like the Americans.

The KDP of former President Masoud Barzani, who was furious after Salih's win, suffered a severe blow last year when the Kurds saw their dream of an independent state after a referendum that no one accepted. It brought Iraq to the brink of civil war. Now some analysts fear that the KDP and PUK will, as in the past, take up arms against each other.

The president must appoint a prime minister within two weeks who will form a government. But months after the elections, the Shiites, who are the biggest power block, can not agree on a candidate. They are roughly divided into parties that are pro-America or pro-Iran. The chances of the current Prime Minister, the moderate Haider al-Abadi, have shrunk considerably since the main Shiite clergyman of Iraq spoke against him.