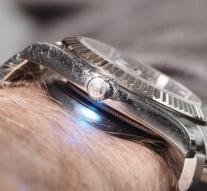 - One of the biggest complaints about smart watches is that they often are not very stylish. The Dutch company Trivoly believe this to have found the solution: a disc that can be placed under each watch and the accessory 'smart'.

It is the 3mm thick disc which is in contact with the smartphone of the wearer. The gadget includes a vibration motor and multi-colored led light that are activated both when you receive a notification. There's just no LCD on the Trivoly, but users can set an app which is the light color and pattern of the vibrations. WhatsApp- one message can be linked as three short vibrations and a green light, while a Facebook message may have a two vibrations with a blue light.

There are two versions of the Trivoly. The Trivoly 1 contains all the above features and a pedometer, while Trivoly 2 also has a heart rate monitor. Fitness Data are sent to the corresponding app, from where the information back to any Fitness can be optionally geëxporrteerd.

The makers raise money for the production via funding website Kickstarter. The target amount is $ 100. 000. The final price of the Trivoly one is $ 119 (about € 108), while the two Trivoly $ 149 (€ 135) must take. Both of these are through Kickstarter to get less. If the campaign is successful, the first units will be delivered in February 2016. The slices are produced in the Netherlands.