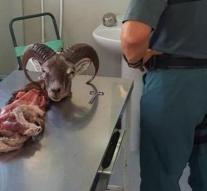 alicante - The Spanish police seized the head of a moeflon on Sunday at Alicante Airport. A Dutch hunter thought to take the dead sheep away with him in his suitcase.

The Dutchman who shot the beast in the mountains at Ayora was fined because he had no hunting license. He also did not have permission to shoot the wild sheep, report Spanish media.

The man thought it was not necessary to report his hunting trophy because travelers for inter-European flights do not have to pass customs. However, for special products such as a mole head, this has to be done.

The police seized the head and transferred them to an animal shelter in Alicante.